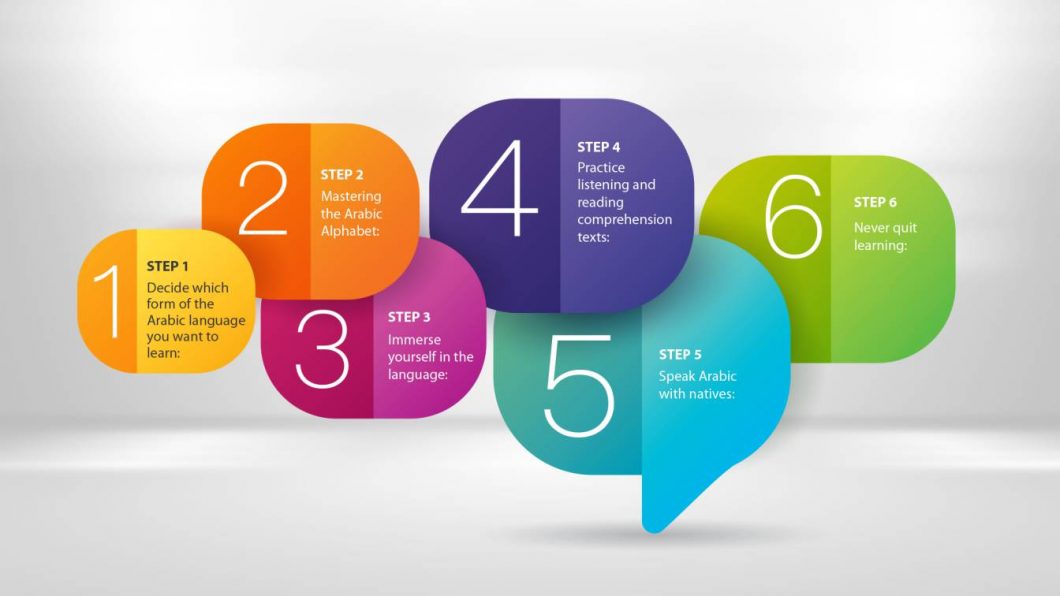 What is the charm of the Arabic language? Why would anyone invest effort and time to learn it? Is it difficult to learn Arabic? Yes, it is a challenging but rewarding endeavor. Arabic is not just a spoken language among people, just like the other languages, it is the language the Almighty Allah spoke with to our prophet Mohammed, peace be upon him, then, to the rest of the people all around the world over of all time. Arabic is one of the Semitic languages, the fourth most spoken language in the world, with nearly 467 million people speaking it worldwide and the official language for the Arab countries and some others.

Indeed, learning a new language is always a courageous step, but when a new language does not share a root with your native tongue, it is even more difficult. So, as a beginner, how could I learn Arabic? What are the most useful steps that simplify the learning process? Arabic has an entirely different system of alphabets, and there are almost no shared words between it and the English language, each word will be completely new; fortunately, there are fruitful steps for a learner to make the learning method easier. Without doubts, these steps need perseverance, commitment, hard work, and time.

You have to choose which type of Arabic language you need to learn since there are three types, which are, the old standard Arabic language, the new standard Arabic language, and the non-standard Arabic_ which have many dialects such as the Egyptian, Levantine, Morocco, Iraqi, and others. Sometimes an Arabic speaker could not understand some other dialects such as morocco even both have the same origin, Arabic. A very critical reason that may help a foreigner to choose which type to learn is the purpose he/ she seeks. For instance, if you are a Muslim and you want to learn how to read the Holy Qur’an, to feel the sweetness of the words of the Almighty Allah, and to understand his teachings then, you need to learn the old standard Arabic.  Also, if you want to learn Arab history or science, the new standard Arabic will be sufficient for your purpose.  Whereas when you want to know their culture, understand their music and films hence the dialectic language is your choice, you need to choose which one is suitable for you to learn_ the Egyptian and Levantine are the most popular and understandable for most other dialects.

“Faith is taking the first step even when you don’t see the whole staircase.” ~ Martin Luther King, Jr.

Knowing the letters is the actual first step in learning Arabic and the hardest one, but you will be able to achieve your goal by following organized guidance.

After being familiar with the Arabic letters and their sounds, you need to start to get involved in the language. Many linguists said: the principal role for learning any language is by exposure, and that could be achieved through dealing with the language; especially, through listening to the native speakers.

Practice, practice, and practice, forever and ever, is the most effective method to gain any skill. As a beginner learner of a foreign language, you need to practice the skills you have learned and ensured a full understanding and comprehension of passages in that language. Alif Arabic offers learning resources in the primary language to help you with a comprehensive understanding of Arabic. From the website, also, you can find native teachers teach you in very effective methods of learning their first tongue. They will test your level and work with you to achieve higher levels of mastering the language.

A careful listener is a great speaker. If you listen carefully to your teachers’ instructions, to the sounds of the letters you have been learned, to the passages you have heard and read silently; then, you will be able to speak the language. And, what is the benefit of learning a language without speaking it? For that, the most prominent benefit you can gain from speaking a language will be through speaking with its natives. By that, you will practice the authentic language within real situations, be exposed to the correct ways of the pronunciation of the words, and be familiar with the different sounds of the letters. Find a partner and practice with him, we should, therefore, thank technology for making practicing a language with the natives, possible and available. Alif Arabic offers this possibility.

You may find this step is not reasonable, or at least it could not be a step-in basis. But, in my modest opinion, it is the most challenging step which if being missed, your efforts will go in vain. Therefore, you may need to enhance what you have already learned and to learn something new each day.

Ready to dip your toes in the water? Glad to hear that, so please download the Arabic alphabet chart, start memorizing it, you could practice for 20 to 30 minutes with a single letter or two each day, after that try to immerse yourself with the language; listen to as many sources of the native language as you could, watch movies and documentaries, practice comprehension passages available in online resources, try to speak the language with its natives and finally keep practicing and learning as much as you could. If you need a hand, we at Alif Arabic will be more than happy to start with you on this fabulous journey.